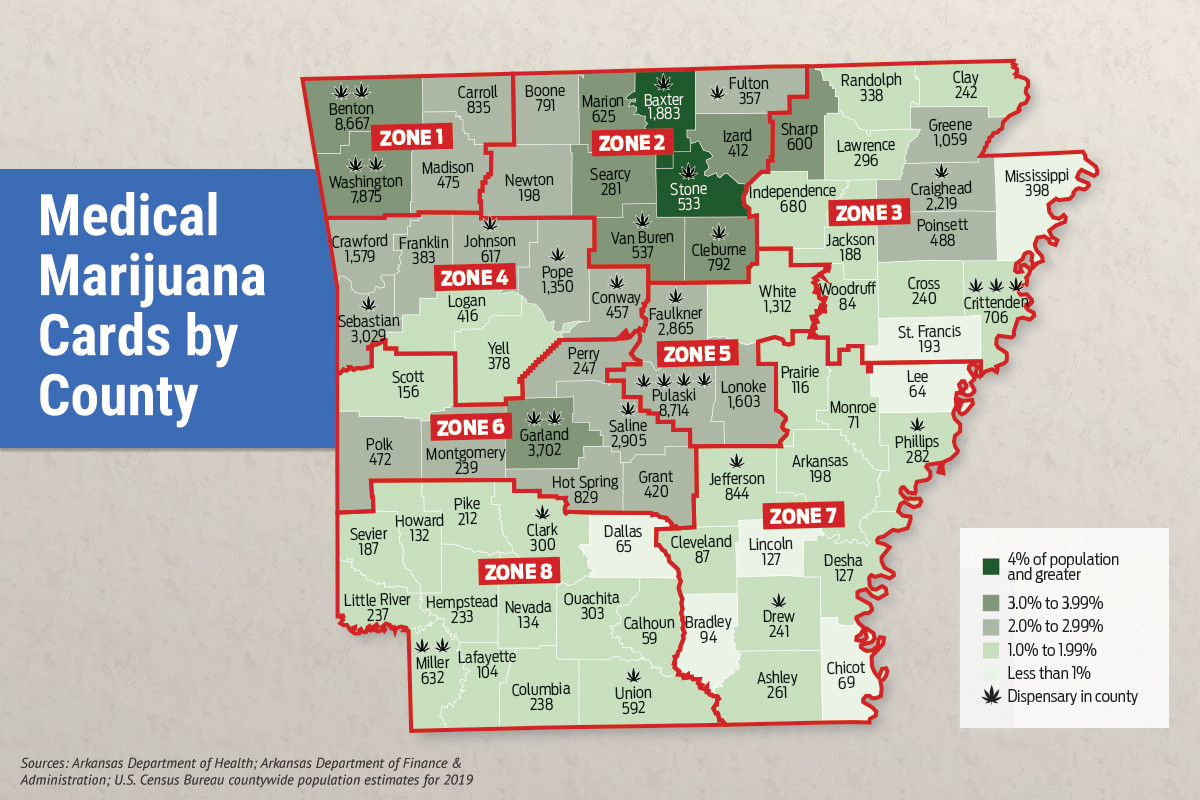 We were unable to send the article.

Arkansans spent $181 million on more than 28,000 pounds of medical marijuana in 2020, the first full year of legal cannabis sales in the state, according to data from the state Department of Finance & Administration.

But the medical marijuana phenomenon is not spread evenly across the state. As of Dec. 31 — a record day for marijuana sales — 31 dispensaries were open in 23 of the state’s 75 counties. Fourteen of them had opened in 2019 and reported full-year sales of between 400 and 3,000 pounds of the plant. The 32nd dispensary opened in Hardy on Jan. 7 of this year.

Interest in buying medical marijuana is similarly uneven. Arkansas Business compared a state Department of Health report on the number of marijuana cards issued to patients in each county with the most recent U.S. Census Bureau estimate of each county’s population and found wide variation.

Baxter County on the Missouri border had 1,883 card holders as of the October report, which is almost 4.5% of the county’s estimated population of just under 42,000. Chicot County, which borders both Louisiana and Mississippi in extreme southeast Arkansas, had only 69 residents with marijuana cards — 0.7% of the estimated population as of 2019.

Stone County, immediately south of Baxter County, was the only other county in which more than 4% of the population had a marijuana card. Generally, south and east Arkansas had fewer cards per capita than central and northwest Arkansas. (See map.) The statewide average was 2.3%, with Pulaski County near that benchmark and Washington and Benton counties both above 3%.

In this issue, we rank the counties by the percentage of the population holding marijuana cards as of the October report. The list includes the number of cards, the Census Bureau population estimate for 2019 and the number of dispensaries currently located in the county.

We also rank dispensaries by pounds of marijuana sold in 2020 and estimate their revenue based on a statewide average price of $6,490 per pound (approximately $406 per ounce). The list includes the opening date of each dispensary, since 17 were open for less than a full year, and the number of employees registered with the state as of Jan. 22.

The top-selling dispensary was The Releaf Center, which opened in Bentonville in August 2019. It sold just under 3,000 pounds last year with an estimated value of $19.35 million. The top-selling dispensary also has the most employees — 76 — although the number of workers varies widely. The No. 2 dispensary, Green Springs Medical in Hot Springs, sold about 80% as much product last year as Releaf (almost 2,400 pounds) but with barely a third as many employees (27).

While dispensaries with 12 full months of sales definitely dominate the list, two of the top 10 opened in the first quarter of 2020. They are:

Four of the dispensaries are called Enlightened Cannabis for People — in Heber Springs, Morrilton, Arkadelphia and Clarksville. DF&A spokesman Scott Hardin said the appearance of a chain of stores has generated questions for state regulators because state law does not allow owners to have an interest in more than one dispensary.

“The Enlightened dispensaries all utilize the same management group to run the day to day operation,” he told Arkansas Business in an email. “However, there is [a] unique, independent list of owners for each of these locations, remaining within the MMC rules. We don’t have any owner with an interest in more than one dispensary.”

Spring River Dispensary is not included in the ranking because it opened on Highway 63 in Hardy (Fulton County) on Jan. 7 of this year and had no sales in 2020. It had 28 employees as of Jan. 22, when the Department of Finance & Administration generated an employee count in response to a Freedom of Information Act request.

Spring River missed the biggest day of marijuana sales in the state’s history.

“December 31, 2020 was the biggest day we’ve had for total sales at $1.22 million,” Hardin said in an email. “For the last two weeks in 2020 sales were averaging about $660,000 a day but then jumped drastically (doubled) on the 31st. Medical marijuana is one of the industries that has managed to thrive throughout the pandemic.”

The list of the state’s eight licensed marijuana cultivators is ranked by the number of employees registered with the state as of Jan. 22. The cultivators are not required to report production, and only five of them are currently in production.

The largest marijuana grower is Natural State Medicinals Cultivation in Jefferson County, which had 159 employees. The original permit holder for Natural State, Joe Courtright of Little Rock, told Arkansas Business that he is no longer associated with the company. The permit holder as of December is Dr. Alonzo Williams, also of Little Rock, and the CEO is Rob Lemberes.

The Newport cultivator originally known as Natural State Wellness Enterprises has been renamed Good Day Farms and is being moved to Pine Bluff.