American pot stocks such as Jushi Holdings (OTC:JUSHF) and Trulieve Cannabis (OTC:TCNNF) have been wildly popular since the 2020 elections. Earlier this November, five states voted to legalize recreational or medical cannabis, showing that the green wave is still strong across the U.S. At this rate, the American marijuana market is expected to win almost $23 billion in sales per year by 2023, while growing at a compound annual growth rate (CAGR) of 21%, according to New Frontier Data.

When it comes to profiting from a vastly underdeveloped and unrealized pot market, investing in fast-growing companies with strong footholds in certain states has become an increasingly popular strategy. Today, let’s look at which stock is the closest thing to a sure bet. The case for Jushi Holdings

Jushi Holdings is one of the nation’s fastest-growing chains of recreational and medical dispensaries. Based on preliminary Q3 2020 data for the period ending Sept. 30, Jushi Holdings now operates 11 stores across six states with plans to open 19 more in the near future. The company holds one of the largest market shares in Pennsylvania, where almost half its revenue comes from.

For the entirety of 2020, the company expects to generate $75 million in revenue. Next year, however, Jushi Holdings projects it will bring in up to $255 million in sales and achieve positive cash flow. The company also has a manageable level of debt and over $82 million in cash and equivalents. On Nov. 24, Jushi Holdings will report full Q3 2020 results.

Right now, Jushi Holdings at first appears to sport an expensive price tag, trading at 10 times sales and four times book value. However, these valuation metrics look only at past financial data. If we are to value the company based on its revenue estimates for 2021, Jushi Holdings is trading for 4.7 times future sales.

That is an incredibly low price to pay for a high-flying growth stock. Will the next stock, Trulieve, be able to compete with Jushi Holdings in terms of brand strength and price?

The case for Trulieve

Trulieve is the biggest chain medical marijuana dispensary in Florida, where 66 of its total 71 U.S. retail stores operate. Founded just five years ago, the company now commands a 52% market share in the Sunshine State. By 2025, Florida’s medical marijuana market will be worth nearly $2.6 billion, and it is currently growing at 25.3% per year.

More than 3,600 patients are using Trulieve’s dispensaries regularly. Each patient visits an average of 2.9 times per month and spends $108 per visit. In 2019, Trulieve’s customers spent $3,900 each per year, representing a significant increase over the $2,800 in annual spending in 2018.

A critical factor behind the company’s exponential revenue growth rate is a combination of higher spending per patient and consumer satisfaction. Trulieve currently boasts a customer retention rate of 79%. Additionally, the marijuana chain has a “no-questions-asked” return policy. Despite this, less than 1% of customers return the grower’s products.

The company is already profitable — a rare feat for most pot stocks. Q3 2020 (ended Sept. 30) was Trulieve’s 11th quarter of consecutive growth and profitability. Its revenue had nearly doubled to $136.3 million from Q3 2019. Over the past nine months, Trulieve has generated $73.7 million in cash flows.

Like Jushi Holdings, Trulieve looks expensive based on its historical financials, trading at 6.9 times sales and 7.2 times net assets. However, at current growth rates, Trulieve’s valuation looks half as expensive assuming that it can double its sales over the next year as well. Additionally, . the possibility that a vote to legalize recreational marijuana on the ballot in Florida in 2022 could be a significant growth catalyst. 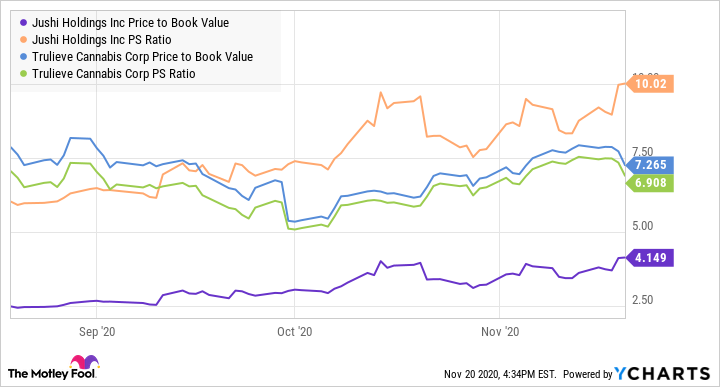 Which is the better buy?

This is one of those instances where investors might consider adding both stocks to their portfolios. Jushi Holdings and Trulieve are both high-flyers, trade at reasonable premiums, possess relatively healthy balance sheets compared to other pot stocks, and have a vast amount of room to expand.

Having the two stocks in the same basket would give investors ample diversification in terms of geographical, state-by-state focus, as weed is still not federally legal. Those companies that do not have a concentrated expansion effort in a few states could be a difficult strategy to scale as long as the U.S. lacks federal legalization, because moving a federally illegal substance across state lines is technically against U.S. law. I believe that both of these stocks are aiming at the right growth strategies for our current legal moment and beyond. It doesn’t hurt that Jushi Holdings and Trulieve are trading at a bargain given their future potential.