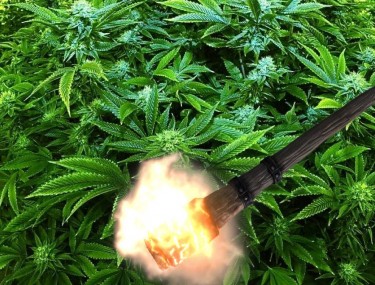 As if cannabis and hemp crops didn’t suffer enough destruction during the wildfires, here you’ve got the Drug Enforcement Administration (DEA) trying to burn off 8,000 pounds of pot a day.

Late last month, the Phoenix division of the DEA posting an ad for a contractor in Arizona who can incinerate as much as a thousand pounds of cannabis per hour, for 8 hours a day, repots Marijuana Moment. “DEA shall inspect the incinerator to ensure no drug residue remains,” the DEA said in the posting. The contractor is responsible not just for burning cannabis but also other illegal substances that have been confiscated in cases “to a point where there are no detectable levels, as measured by standard analytical methods, of byproduct from the destruction process.” They would also need to burn off the packages responsible for containing these packages during transport or concealing it during drug trafficking.

The job description also states that an armed DEA agent will be around at all times during these incinerator sessions; the contract winner would have to undergo drug testing, and there will be camera footage of the process as well. “All information obtained shall be used only for performing this contract and shall not be divulged nor made known in any manner except as necessary to perform this contract,” the DEA explains in the post.

The DEA also shed light on expectations around the post: they say that it’s not a job offer, “this is not a request for proposals and does not obligate the Government to award a contract.” Instead, they claim they are “conducting market research, and is encouraging all businesses, including small businesses, to respond to this notice.”

Isn’t that a little suspicious?

Naturally, there is a lot of secrecy surrounding the post. Whomever gets hired wouldn’t be allowed to talk about their experiences on the job even with friends. “The contractor and its personnel shall hold all information obtained under the DEA contract in the strictest confidence,” the agency says. “All information obtained shall be used only for performing this contract and shall not be divulged nor made known in any manner except as necessary to perform this contract.”

Not The First Time For The DEA

The DEA also released the same posting last year, though they were then looking for contractors based in Houston, Texas. They were looking for companies rather than individuals who could carry out the job.

The DEA released a statement last year further clarifying this strange offer. “Although we appreciate local citizens’ willingness to offer their help, this is a complicated, large-scale government contract we’re required by law to bid every few years, and there are usually only a handful of companies with the necessary facilities and resources to help us dispose of this material. While it makes for an interesting headline, the truth is far more prosaic – our agents working across the Houston Division make a huge number of great cases, and as a result, we seize a tremendous amount of illegal drugs. Arranging for the safe and effective destruction of these drugs is just part of the job.”

It’s become clear that the DEA is not a fan of cannabis in any way, shape, or form. They are trying to go to lengths in order to destroy what they can.

Aside from the job post, they were recently sued by Agro Dynamics LLC, who in August 2019 was able to obtain the documents necessary to legalize hemp on their property located in San Diego. After they were able to get the authorization, they planted around 3,000 hemp plants that have been proven to contain below .3% THC. “Specifically, a Victory Analysis laboratory test for this hemp cultivation showed results of less than 0.01 THC which is clearly within legal limits.”

According to Agro Dynamics, an aerial reconnaissance working to eradicate cannabis last year, combined with the failure to search county records resulted in a search warrant at their premises. By September 12, 2019, police officers executed the warrant, and even if they were informed that they already had Registration Issuance from the County of San Diego to legally grow hemp, the officers ignored them and continued to get rid of all hemp plants, resulting in a total loss of some $3.45 million.

There are many defendants in this case as well as the DEA, members of the San Diego Sherriff Department as well as other parties.

Hemp Industry Daily was able to get information on the lawsuit, which states: “The Warrant authorized the seizure of marijuana, not industrial hemp. Defendants knowingly, intentionally, and/or negligently took Plaintiff’s industrial hemp, in violation of Plaintiffs rights protected by the Fourth Amendment to the United States Constitution.”

They aren’t the only ones who are suing the DEA recently. The Hemp Industries Association just filed a complaint last month, claiming that the recent regulatory changes “would effectively destroy the burgeoning hemp industry.” In other words, when the 2018 Farm Bill was placed into action, hemp that contained less than 0.3% THC was no longer considered illegal but just in August of this year, the DEA set forth an “interim final rule” which became effective immediately, allowing them to state that any plant with over 0.3% THC will already be considered illegal cannabis even if it came from legal industrial hemp crops.

“DEA’s latest jurisdictional overstep threatens every stage of the hemp production supply chain and jeopardizes the entire hemp industry,” reads the complaint. “If allowed to stand, DEA’s intrusion will undermine a linchpin of the new hemp economy that has created tens of thousands of new jobs and provided a lucrative new crop for America’s struggling farmers.”

A DEA spokesperson said that they don’t comment on pending legal matters.

“Given that these materials are inevitable results of the hemp manufacturing process, DEA’s misinterpretation criminalizes essential hemp processing and manufacturing operations and activities,” write the plaintiffs.

With all the legal action surrounding the DEA, we hope that a new president in Biden would pave the way for changing the regulatory landscape around weed and finally make it legal at the federal level. Once that happens, the DEA would no longer be able to act unjustly towards ethical, legal cannabis businesses. 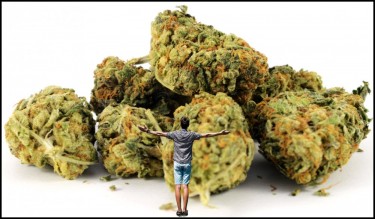 WHAT IS THE HONORABLE THING TO DO WITH 20 TONS OF ILLEGAL WEED?