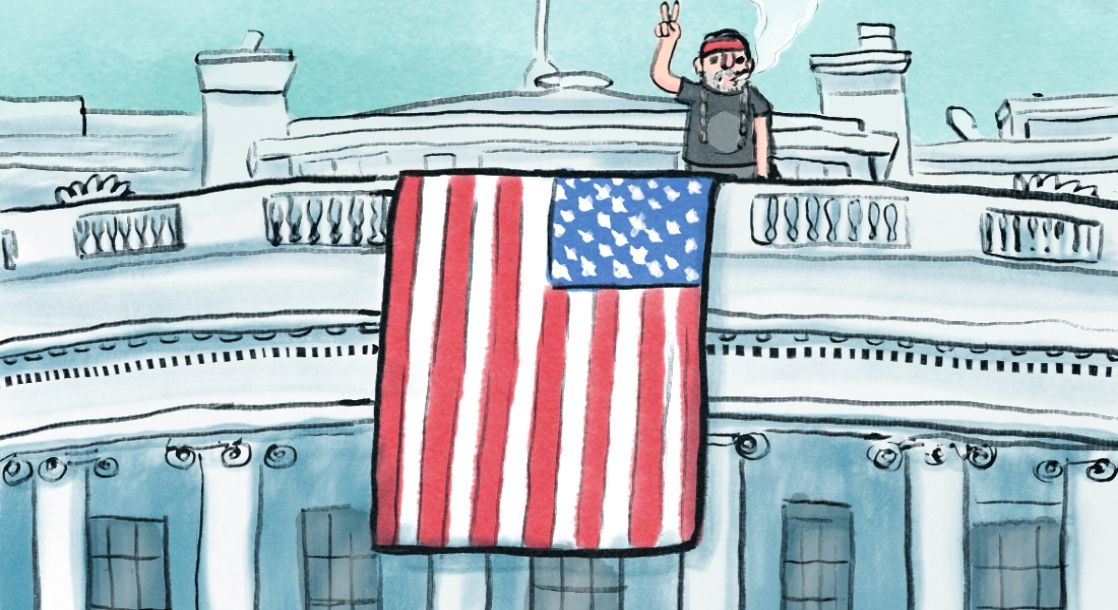 Former Prez. Jimmy Carter confirms that his son Chip and Willie Nelson definitely smoked weed together on the White House roof in a new documentary that chronicles friendships with Willie, Bob Dylan, the Allman Brothers, and other musical marijuana icons.

In a new documentary, Carter not only confirms Willie Nelson’s story about smoking weed on top of the White House, he reveals that Willie’s rooftop smoking buddy was his own son, Chip Carter.

Jimmy Carter: Rock & Roll President is a joyful and (behind-the-scenes) joint-filled look back at Carter’s connection to the contemporary music and musicians of his day, both on the campaign trail and during the tenure of his administration.

“When Willie Nelson wrote his autobiography,” Carter says in the doc’s trailer, “he confessed that he smoked pot in the White House and he said that his companion was one of the servants at the White House. It was actually one of my sons.”

Carter smiles as he makes the revelation, and later in the film, he says it was Chip Carter, who was 28-years-old at the time and had been openly friendly with NORML founder Keith Stroup.

Willie himself broke the story in his 1988 memoir, Willie: An Autobiography. “Sitting on the roof of the White House in Washington, DC, late at night with a beer in one hand and a fat Austin Torpedo in the other,” he wrote. “My companion on the roof was pointing out to me the sights and layout of how the streets run in Washington… I let the weed cover me with a pleasing cloud… I guess the roof of the White House is the safest place to smoke dope.”

In his 2015 follow-up, It’s a Long Story: My Life, Willie gets more specific, describing how Chip “pulled out a joint” and said, “Think it’s time to burn one, Willie, if you don’t object.” We all know what happened next.

“I accepted the offer,” Willie wrote. “The smoke took the edge off my excitement. There I was smoking weed and watching the city lights flicker like fireflies… Getting stoned on the roof of the White House, you can’t help but turn inward. Certain philosophical questions come to mind, like… How the fuck did I get here?”

The movie contains copious footage of Carter with the Allmans in concert throughout 1975 and ’76. Their partnership elevated both the Georgia-based band and the presidential hopeful, who was then governor of the Peach State.

“For a time,” CMT wrote of the team-up, “Carter, in effect, became the Allmans’ opening act. He was introduced, gave a short campaign speech, and then introduced the band — in the process raising his profile with young voters all over the country. And raking in campaign funds.”

Always idealistic, Carter also appealed hugely to youth by becoming the first president to proclaim that marijuana should be decriminalized (and the last to do so until Bill Clinton mentioned it in December 2000, on his way out the Oval Office door. Thanks, Bubba).

Carter even formerly asked Congress to enact decriminalization in March 1977, during his first 100 days in office. Obviously, he wasn’t able to make it happen.

Carter lost in 1980 to Ronald Reagan, the Commander-in-Chief who launched the War on Drugs. Since leaving office, Carter has repeatedly called for an end to that madness. Jimmy even came out in 2012 for full legalization — a prospect that’s not even on the table (yet) in the 2020 presidential race.

Jimmy Carter: Rock & Roll President premieres in theaters and online on September 9. See it. And then vote against Donald Trump in November.

Mike McPadden is the author of “Heavy Metal Movies” and the upcoming “Last American Virgins.” He writes about movies, music, and crime in Chicago. Twitter @mcbeardo