Charlotte’s Web [TSX: CWEB] (OTCQX:CWBHF) and CV Sciences (OTCQB:CVSI), the two largest publicly-traded companies in the CBD space, are locked in a tight race to become the leader of the nascent industry. Both have been growing quarterly revenues by double to triple digits on a YoY basis and have added experienced outsiders to their respective management teams.

While we are bullish on both companies, we believe that the valuation gap between the two has grown too large and is due to narrow in the coming months. While CVSI does have a poor track record when it comes to certain aspects of SEC compliance, we believe the company has moved on from its past and is focusing on taking advantage of the opportunity to become a leader in one of the fastest-growing industries in quite some time.

We will provide a comparison of the two companies below and explain why we believe that the valuation gap between the two should narrow.

CV Sciences is a Las Vegas-based company that is involved in the production and sale of CBD-infused products under its brand PlusCBD. These products include topical ointments, gummies, tinctures (concentrated liquid herbal extracts), capsules, and pet products. The company also has a specialty pharmaceuticals segment that is focused on developing pharmaceutical uses for cannabidiol.

CV Sciences markets CBD products including topicals, gummies, tinctures, and others through 5,300 retail outlets in the United States and through a website (pluscbdoil.com).

Charlotte’s Web is a Colorado-based company that is involved in the production and sale of CBD-infused products. These products include topical ointments, gummies, tinctures (concentrated liquid herbal extracts), capsules, and pet products.

The company, formerly known as Stanley Brothers Inc., was started in 2008 by seven brothers who became interested in the medical benefits of marijuana after their uncle was diagnosed with cancer.

Charlotte’s Web also markets similar products at 7,871 retail outlets across the U.S. and through a website (charlottesweb.com).

Product selection and availability are largely the same between the two companies, although we feel that CWBHF has a more aesthetically appealing website and branding. On the other hand, prices for Charlotte’s Web products tend to be a bit higher.

Both CWBHF and CVSI have grown revenues at a brisk pace over the past few years, per the chart below:

Charlotte’s Web outperformed CV Sciences in 2017, as it nearly tripled revenues from $14.7 to $40 million. However, CVSI more than doubled revenues in 2018 from $20.7 million to $48.2 million, narrowing the gap between itself and CWBHF. The “Ratio” row in the above chart shows the ratio of CWBHF revenues to CVSI revenues: this ratio climbed to 1.9 in 2017 (when CWBHF’s revenues were almost double those of CVSI) but has since fallen to ~1.45.

Both companies have grown very quickly by capitalizing on the “CBD craze,” which has seen a large spike in public interest in the compound. The Brightfield Group, a market research firm that specializes in the space, expects annual CBD sales to reach $22 billion by 2022.

Investment bank Cowen & Co. forecasts annual CBD sales to reach $16 billion by 2025, which it admits is a conservative estimate. Although CWBHF and CVSI are direct competitors, both have room to grow if they can maintain their share of what is clearly a large and quickly growing pie.

Below is a snapshot of each company’s capital structure and market valuation: 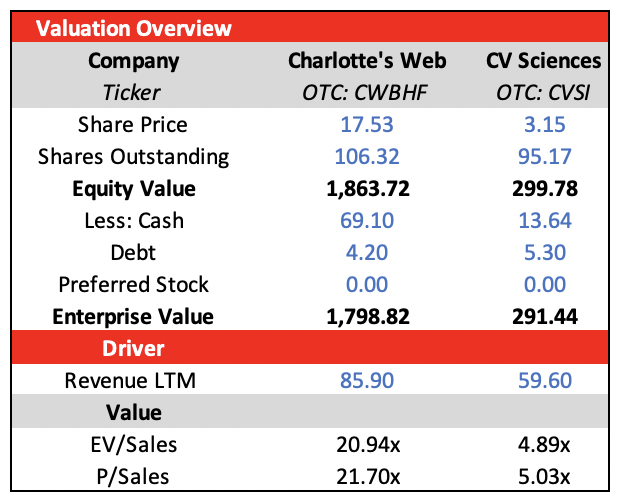 Note: Several websites, including Yahoo Finance, quote CWBHF’s market capitalization as ~$700 million. This is incorrect and based on the false assumption that CWEB only has 39 million shares outstanding. This is because the company has 138,322 proportionate shares outstanding, which are convertible to common shares at a ratio of 400:1. These proportionate shares are mainly held by shareholders of Stanley Brothers Inc. (Charlotte’s Web’s previous incorporated name). Page 2 of the company’s prospectus provides more details about this.

We believe shares of Charlotte’s Web are more expensive than those of CV Sciences for the following reasons: 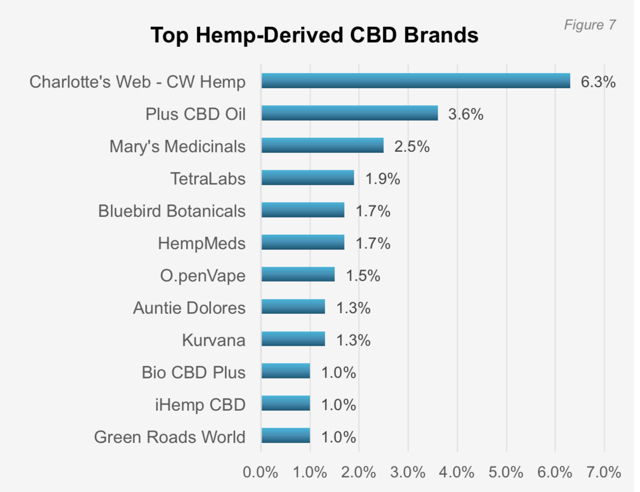 We do agree that Charlotte’s Web should trade at higher multiples than CV Sciences: it is generating more revenue, has a greater retail footprint, and has a brand that is better known. However, we do believe that the valuation gap between the two companies is expensive. Charlotte’s Web generated just 45% more revenue than CV Sciences in 2018, yet its shares are currently valued at nearly 6x those of CVSI.

This valuation gap should continue to narrow over the coming months as investors start to pay more attention to CVSI and note its relative cheapness.

Risks to Investing in Charlotte’s Web and CV Sciences

The following is a list of risk factors that investors should carefully consider before investing in the CBD industry as well as the two companies described above:

While there is a significant amount of uncertainty surrounding the space, we believe that CBD companies are worth a close look from investors interested in getting involved in the industry. Although Charlotte’s Web is the industry leader, we believe CV Sciences also looks attractive given its relatively cheap valuation and significant growth.

We will keep readers posted through articles on this site and welcome all comments and feedback.

Disclosure: I am/we are long CVSI. I wrote this article myself, and it expresses my own opinions. I am not receiving compensation for it (other than from Seeking Alpha). I have no business relationship with any company whose stock is mentioned in this article.